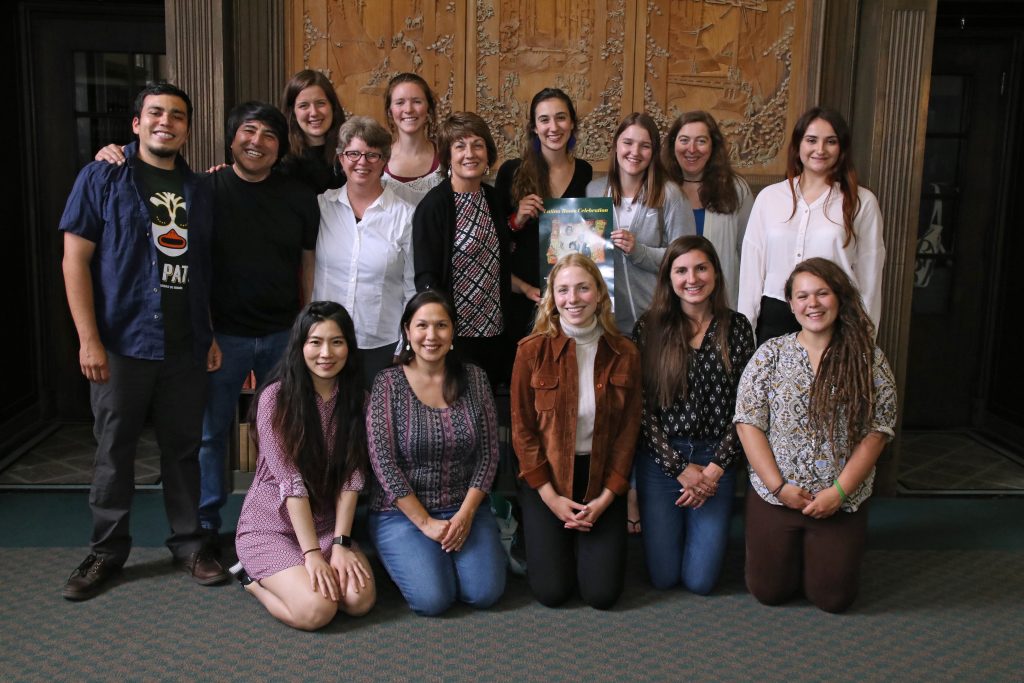 Since our spring 2015 update, the Latino Roots traveling display has been to Medford, Cottage Grove, Salem, Eugene, and Springfield, reaching over 50,000 people in viewership since the project began in 2010. Although CLLAS is closed during summer months, we were also able to coordinate several hosting opportunities through volunteer efforts. One set of panels circulated in Salem throughout the summer, and the other set stayed in the Eugene/ Springfield area and circulated for short-term events such as art walks and festivals.

At South Medford High School, where the display was hosted for over two months, feedback from administration indicated that engagement with the project was high, and the display was well received by students, administration, and the community on the whole. SMHS has a student population of approximately 1,800 students, with activities every weekend bringing hundreds of family and community members for plays, concerts, and sporting events. Leadership students at South Medford High School arranged the panels in the school’s grand entry as a self-guided tour.

Another example of the impact the Latino Roots traveling display has comes from a teacher at an elementary school where the panels were housed, who said: “I didn’t get any of that history until I got to college. I felt cheated out of knowing really phenomenal people because my textbooks didn’t reflect it, and my teachers didn’t go the extra mile to educate us. The panels give everyone a sense that we are all part of the present, the past, and the future. And it’s about the people that live in the same community as I do.”

Eugene’s Awbrey Park Elementary School is hosting a full set of panels through late January to complement the school’s Latino Parent Night and a multicultural night. A partial display is circulating with the UO Opportunities Program (opportunities.uoregon.edu).

In response to increased community interest and engagement, CLLAS will draw on funds donated by SELCO Community Credit Union to create a new set of lightweight traveling panels, intended for short-term installation at community events such as art walks, health fairs, celebrations, lectures, and more. Additionally, CLLAS plans to use the Latino Roots Digital Archives, housed at the UO, to create several new panels. Currently, CLLAS staff is analyzing the archival materials created by three generations of the Latino Roots class (2011, 2013, 2015) for potential content. By connecting the traveling display with the Latino Roots class and Digital Archives, the Latino Roots Project is able to serve as an educational tool for institutions and communities throughout Oregon.

If you would like to book our traveling display for your organization, or for more information about the project, please contact Latino Roots Project Coordinator, Tamara LeRoy, at (541) 346-5286 or tleroy@uoregon.edu. 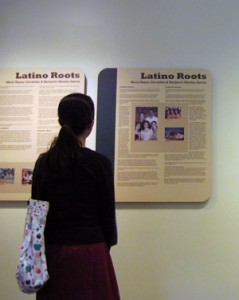 The Latino Roots in Oregon panels are on display at Springfield High School during the months of October–December 2011. These fifteen portable wooden panels contain photographs and stories about seven immigrant families, which are bilingual in Spanish and English.

The panels were on display for more than a year at the Lane County Historical Museum (January 2009 through March 2010), and were part of the exhibit “Changing Demographics: The People of Lane County.” The Latino Roots panels feature a timeline of Latino presence in what is now the state of Oregon beginning in the 1700s, maps, demographic information, information about Latino youth, and the stories of seven families who came at different times to Lane County from California, Texas, Mexico, Guatemala, El Salvador, and Chile. A research team led by CLLAS director Lynn Stephen (Anthropology, Ethnic Studies) created the panels. The team included Gabriela Martínez, Patricia Cortez, Guadalupe Quinn, Mauricio Magaña, Sonia de la Cruz, Kate Williams, Lukacs Nguyen, and Magali Morales.

The Latino Roots Project is administered through the Center for Latino/a and Latin American Studies (CLLAS) and is a part of the “Americas in a Globalized World: Linking Diversity and Internationalization” big idea at the University of Oregon. Selco Community Credit Union is the community sponsor.

For further information on the project please write to cllas@uoregon.edu

Eugene, Oregon: June 6, 2011—My name is Lidiana Soto. I’m a graduating senior at the University of Oregon majoring in Ethnic Studies and Political Science. I had the opportunity to be a student in the Latino Roots courses that produced the videos you’re about to see on display upstairs in Special Collections [Latino Roots student documentaries]. Our Latino Roots courses brought together a group of 18 students over two quarters. During Latino Roots I, taught during winter quarter we learned about the racial/ethnic history of Oregon since more than 500 years ago and the place of Latino and Latin American history in that larger story. We also learned how to conduct oral history interviews and how to work a video camera. We each identified an individual or family whose story we have documented. We recorded an audio interview and then also a video interview. This quarter, during Latino Roots II, we learned how to shoot and edit our videos and each have produced an original ten minute documentary which we are going to present today. We are also archiving the audio file, video, a transcript, and finished video with the University of Oregon Libraries, Special Collections & University Archives. We are, literally, making history [See story on CLLAS website].

Let me tell you something about my own story. I grew up in Mt. Angel, Oregon, and worked the fields of the fertile Willamette Valley alongside my family for many summers. END_OF_DOCUMENT_TOKEN_TO_BE_REPLACED 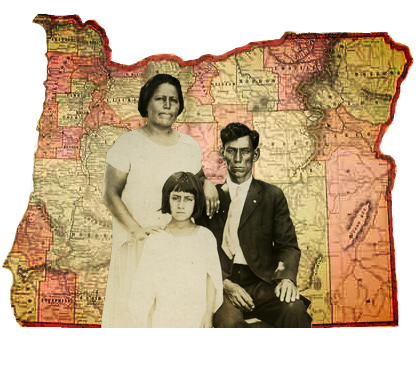 This project began in conjunction with the brainstorming of an exhibit being planned for the Lane County Historical Museum around the celebration of the Oregon sesquicentennial in 2009. “Changing Demographics: The People of Lane County” offered an opportunity to introduce the voices of groups not previously well-represented at the museum, and included panels on Native Americans, Jewish communities, Asian immigrants, African American history, and Latino Roots.

Dr. Lynn Stephen, distinguished professor of anthropology at the University of Oregon, directed the creation of the original seventeen panels used in the Latino Roots portion of the exhibit,  teaming up with associate professor Gabriela Martínez from the School of Journalism and Communication, students, and community activists. Professor Martínez produced and directed the documentary “Latino Roots in Lane County,” which was part of the exhibit. The panels and the documentary inspired additional projects, which Dr. Stephen began developing with Dr. Martínez.

Currently, Latino Roots in Oregon includes an exhibit composed of fifteen portable wooden panels containing photographs and stories about seven immigrant families; a booklet that captures these same stories and photographs; classes at the University of Oregon; two video documentaries; a website and digital archive. All materials are bilingual in Spanish and English. The Latino Roots Project is administered through the Center for Latino/a and Latin American Studies (CLLAS) and is a part of the “Americas in a Globalized World: Linking Diversity and Internationalization” big idea at the University of Oregon. For further information on the project please write to cllas@uoregon.edu

Booklet: The 33-page bilingual “Latino Roots: In Lane County, Oregon/ Raíces Latinas del Condado de Lane, Oregon” booklet is available for download on the CLLAS website and for purchase at the University of Oregon Bookstore. It reflects the content of the original seventeen panels and can be used with classes who view the panels.

Latino Roots in Lane County projects were co-sponsored by the Center for Latino/a and Latin American Studies and the Center for the Study of Women in Society.

“Latino Roots in Oregon” is the working title of a 52-minute documentary by associate professor Gabriela Martínez, doctoral student Sonia de la Cruz, and local community activist Guadalupe Quinn. The film will be suitable for public television viewing and DVD and Web-streaming distribution. Currently in production phase, this 2009-2010 CLLAS grant-winning project addresses the important but often neglected history of Latin American and Latino settlement in Oregon.

Some came driving cattle with early ranch pioneers along the Siskiyou Trail, some came as mule packers for the U.S. Army, some were Basque sheepherders from the Spanish Pyrenees, and some joined the Bracero Program during WWII and worked the fields and orchards providing manual labor. The ways and times Latinos made their way to Oregon are many and varied and provide for rich story telling as well as a databank for historical purposes.

“Latino Roots in Oregon” is based on extensive research and uses archival materials and in-depth journalistic and ethnographic interviews. An open-access digital archive is part of the overall research project and an important derivative of the fieldwork for the documentary. The archive encompasses moving images, still photographs, documents and text that work together to tell the stories of Latin American and Latino historic and contemporary settlers who call Oregon home. It will be housed in UO Libraries Digital Collections.